Jennifer spent Summer 2018 in Boston living it up making great friends and memories. She’s shared all of her tips and recommendations for living and loving your J1 in Boston!

I went on my J1 to Boston in 2018 and without a doubt, it was the best experience of my life. My best friend Chloe and I had always planned on going to America together since we were very young and in November 2017 we booked the J1. I came across USIT when I searched about J1s online and they appeared to be the most popular and experienced agency to go with. Originally we wanted to go to San Diego as it was the ultimate hot spot that year. Little did we know how popular San Diego was at the time and it being entirely our own fault, we did not apply for jobs on time. So we decided to go elsewhere….

Chloe suggested Boston as she had a friend going so I thought to myself why not? As it seems such a cool, vibrant city and has a big Irish heritage. It was the best decision we ever made!

The weather was amazing in Boston, it was 25 degrees plus most days! I came home with a great tan. With the weather being so good we never let a day go to waste! We went to a Boston Red Sox game in Fenway Park which was tremendous fun! The only downside was that it cost $10 for a beer! We also did the Codzilla tour which was great craic, we all got soaked and we got to see Boston’s beautiful skyline. We went kayaking on Charles River which was a fantastic experience as the sun was beaming and it was great to see the city from a different angle! We also went to the Wax Museum one of the days the weather wasn’t great, I would definitely recommend going to it, the figures of celebrities were so realistic! There was always something to do and see in Boston, just taking a walk around the city can bring you to cool, alternative places such as Chinatown or Little Italy. The transport system in Boston was excellent, the “T” was very punctual and it offers subway, bus, trolley car, and boat service to just about everywhere in the Greater Boston area and beyond. It was about $20 a week for unlimited trips on the T which is very reasonable in price considering how much I used it.

We went with the premium package when booking the J1. Luckily Chloe and I got the same job in the Seaport Hotel. We were both Food and Beverage Supervisors of the Tamo Restaurant. Both of us loved our jobs! I couldn’t recommend the Seaport Hotel more for a place to work as a J1er, especially if you are over there alone as you will be guaranteed to make a great group of friends. One of the girls I met through the Seaport is coming to New York with me this year! There were about 12 of us there who were Irish which was brilliant as it felt like home hearing all the Irish accents. We became a big family along with a few Americans who were around the same age as us. We always went out together and met up on our days off to do touristy things or just hang out. We made a lot of money that summer too, we made back what we spent on our J1 in about two weeks!

I found our accommodation on the J1 Boston Page, we sublet for the summer off Harvard University students. We also found our roommates on the same Facebook page, they were such a great group of people and one of the highlights of my J1 were the nights we all sat in having the craic, drinking Four Loko and telling stories. We lived out in Cambridge, it was such a beautiful, scenic place and we had Harvard University right beside us which was amazing! There were restaurants, cafes, shops, and parks all within walking distance. 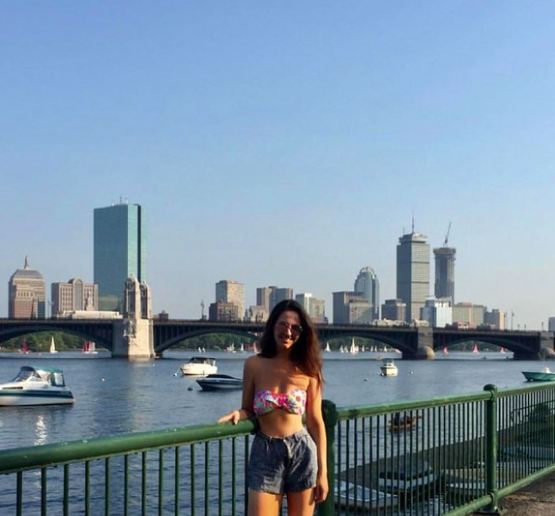 We traveled to New York at the end of July to attend Elrow festival. We got the Greyhound Coach from Boston to New York and it only took 4 hours. It only cost about $30. I fell in love with New York as soon as I stepped foot in Times Square. There were skyscraper buildings full of billboards and lights, it was so beautiful! I have seen Times Square before in different movies but to actually experience it in real life is completely different, I was in a state of euphoria! We went from shop to shop, hunting down bargains and spending dollars to our heart’s content.

We took a walk around Central Park, visited the Rockefeller Center, had a look around The Met Fifth Avenue, saw the famous Brooklyn Bridge, looked around Wall Street and viewed the famous Carnegie Hall during our stay.

The festival was so much fun, I would say it the majority of the attendees of the festival were Irish which was great as we got talking to other J1ers who stayed in New York for the summer and they told us about their wonderful experience. I love New York so much and I cannot wait to spend this summer there and make more incredible memories!

Want to have an amazing J1 in Boston like Jennifer?

Head over to our website to start planning your adventure now!