Leaving Ireland, living in Manhattan’s Upper East Side and working in a bar in the middle of Times Square. It sounds like a US sitcom – or the start of Hallmark romcom. It wasn’t – it was how I spent my summer on my J1 in the States. Here’s how it went down.

Why do a J1 Working in America was something I always dreamt of doing. Deciding to do a J1, registering, and committing is probably the hardest part of all. As a final-year student, the stresses of organising my visa and job – as well as looking at finals and projects – was not ideal. That’s where USIT came in. Some quick research and a few clicks of my mouse, and my application was started. They looked after everything and made the application process simple. Outside of filling out a few forms and a couple of interviews, all I had to do was pack my bags and go away for the summer of my life.

Coming to America
Two weeks before I received all my forms and my passport, I was ready to go. The first of June was my departure date, and I couldn’t wait. Queues in the airport were long and my flight was delayed, but nothing was going to kill the excitement.

JFK! I had landed. It was very late, and I stupidly didn’t check to make sure Uber was working with my cards and I had no dollars. I know what you are thinking, how were you not prepared? The truth is, I was but didn’t think I would have an issue getting a taxi. I recommend having a look into where you’re going and how you’re getting there in advance, winging it doesn’t always go to plan.

Our accommodation was only 30 minutes from the airport, it was lashing rain, but the bright lights of the Big Apple started coming into focus as we were heading over one of the 22 bridges onto the island. I don’t really have the words to describe it, but arriving in NYC felt quite poetic – a sense of belonging and home comes to mind when I think back.

Living in NYC
I had a week in New York before starting work and I used that time to get most of the touristy stuff out of the way, so that I could begin to feel like a real New Yorker. I saw everything, Central Park, the Statue of Liberty, Times Square, Ground Zero, Wall Street, and of course every bar that Manhattan had to offer!

Where I was staying was really close to Central Park and where I worked was really close to Bryant Park. On my days off Central Park was the best place to be to have some food and catch up on my tan, but my favourite place was Bryant Park. I would go on my lunch or after work while I waited for friends, and it was the nicest place to just sit and hang out. They also had music events and night cinema at the weekends, which were all free.

Every day was a little bit different, whether it was with work meeting different people and making new friends or organising a day of fun activities or checking out a new restaurant and bar. I did find a favourite place for drinks, a bar on the Upper East Side called the Supply House. One of the owners grew up not too far from me and it gave off a feeling of being back home. (Not that I wanted to be at home or nothing against bars in America, but nothing beats the local. And if you can find something close to it abroad, you’re going to fall in love). 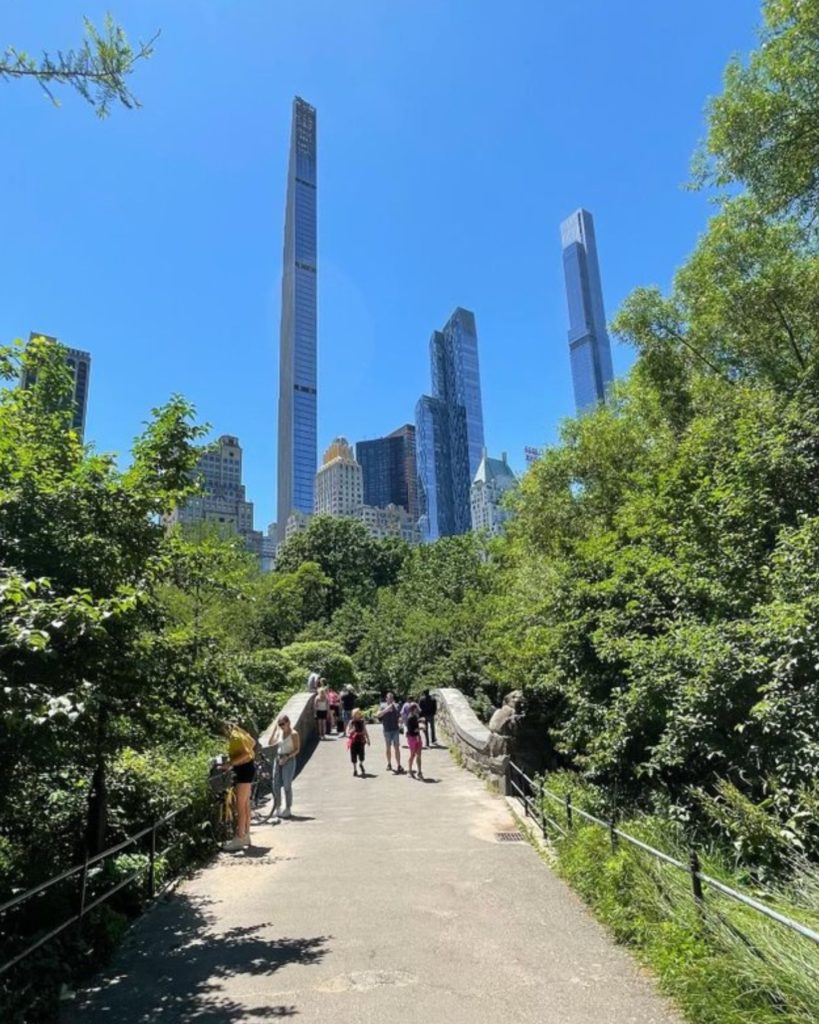 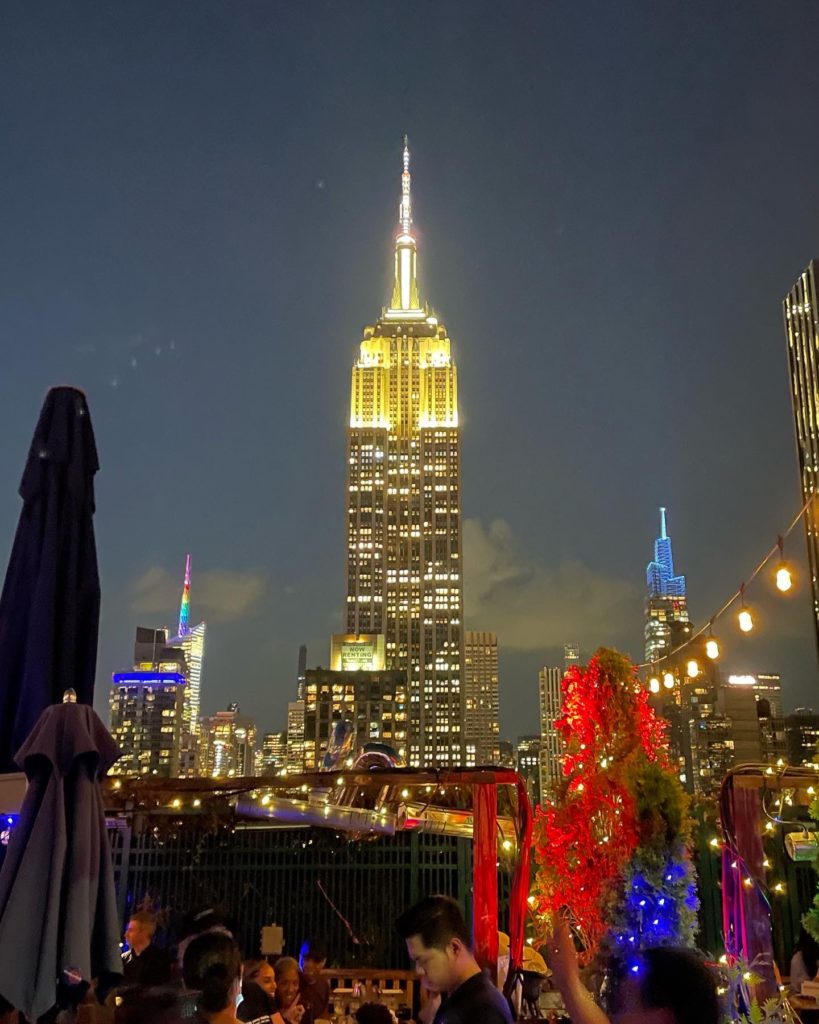 Finding a job
I’d pre-arranged a job with USIT working a job as a bartender in Margaritaville Resort Times Square. It was working with a mixture of other J1 students and Americans. From management to everyone else that I worked with – everyone was so nice.

I had a lot of bar experience back home, but having to learn about 50 different cocktails was an interesting challenge, especially for someone who doesn’t like tequila! The customers were great – always someone to talk to and talk about my plans for the summer which gave me some great insights as to where I would go afterwards.

The nicer you are to customers, the better tips you made. And the more tips you made, the more fun you can have in a very expensive city like NYC. There were a lot of events held in the restaurants, from pool parties to an NFT convention booking out the entire building. There was never a dull moment. There was always a drinking session in the local bar after work with many a memory and story to tell.

I am a big sports fan, but one sport that I could never get my head around was baseball. I’m not lying when I say I am now hooked. I went to see the Yankees play in Yankee Stadium, and my word – what a spectacle! The atmosphere, the sight of the stadium both inside and out, and the action in the game had me on the edge of my seat. I guess the saying ‘don’t knock it til you’ve tried it’ rings true in my experience.

That’s what the J1 is, it’s an experience. Make the most of it, and try everything. Three months can go really quickly, so do as much as you can as often as you can. Most final-year students won’t have the chance to get this visa again, much like myself, so when you do it you won’t regret it.

Traveling after J1
One of the best parts about the J1 is the ability to travel America for a month once you finish working. When I arrived in America, I didn’t have much of a plan for this. But the more I talked to people at work, I started forming a plan and an idea of how much money I would need. Don’t worry about having it organised before you go – as there is plenty of time to do it while you are there.

My first stop on my American tour was Nashville in Tennessee, the country music capital of the world. It was recommended to us by an Irish bar manager, and I was delighted he did. Broadway in Nashville has more live music bars than I have ever seen anywhere else, it really doesn’t compare to anywhere else I had been. Bars and restaurants were open from 9am to 2am, with live music being played every hour on the hour. You could be there for a week and still not make the most of every bar. The Country Music Hall of Fame is also in the centre of Nashville and is an exciting thing to do while also strolling around the main parts of the city.

My next stop was the Windy City, which lived up to its name. I was staying on the Magnificent Mile, which is bang in the centre of Chicago – just down from the wonderful eyesore that is Trump Tower on the canal. There are so many amazing restaurants and bars in and around that area, that you can just drop into and have a casual lunch, dinner or drinks.

The canal walk is the perfect opportunity for those famous Instagram pictures and the Museum of Natural History is worth stopping into. Chicago has a famous baseball team called the Cubs who play in Wrigley Field. We did the Chicago thing and got a famous deep dish pizza and then headed off to the game. The pizza was amazing, and the game was just as good. Pizza, popcorn, beer and sports – what more could you ask for. 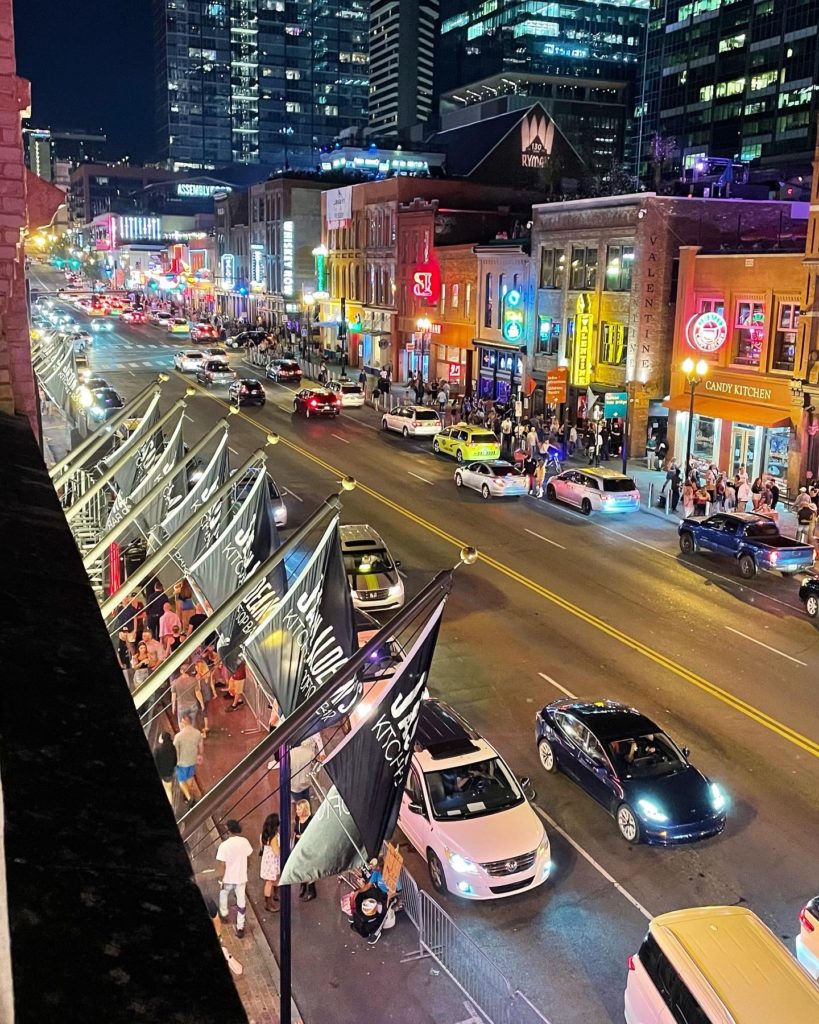 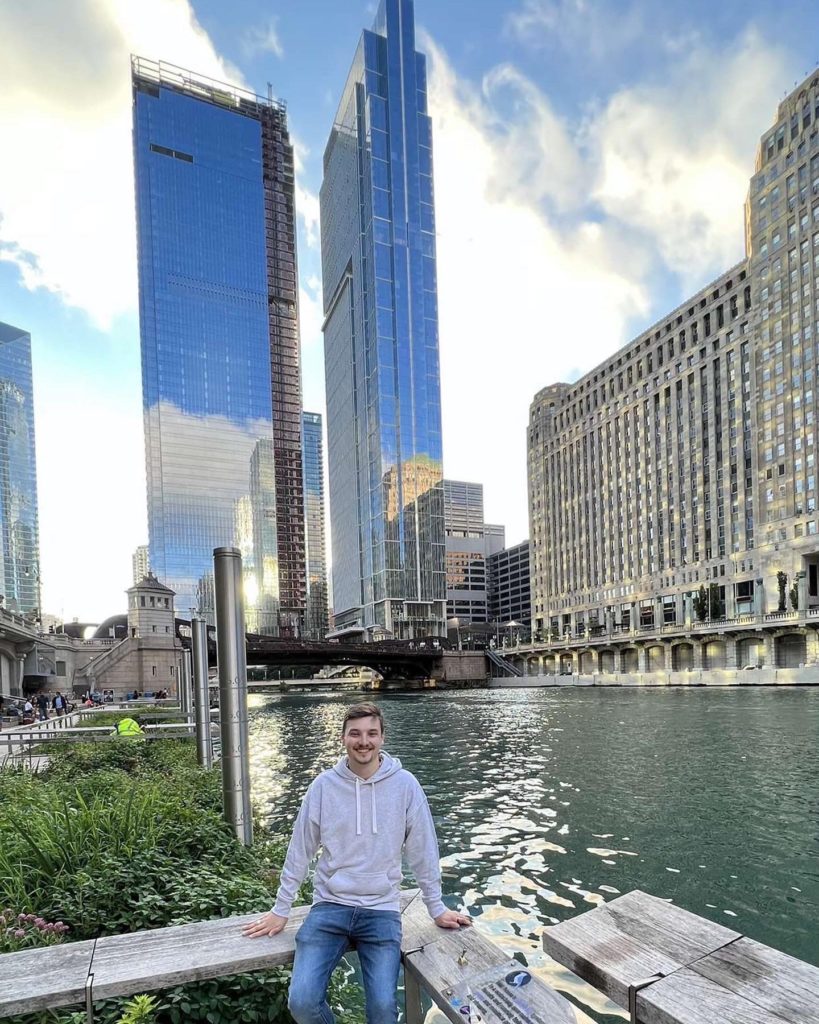 After Chicago, we went to the West Coast for some sun and beaches. That was not what met us in San Francisco in August! It was cold, wet and the sea was freezing. Even with the unexpected bad weather and freezing temperatures, we still found lots of fun things to do. When the weather cleared, we rented bikes and spent the day cycling over the Golden Gate Bridge. We cycled through the fog and down into sunny Sausalito, a lovely little town in the bay area. The cycle wasn’t the easiest, but once you get to the other side the fog disappears and the sun starts to come out giving you a true taste of California. I spent a lot of time climbing the hilly streets of San Francisco, and of course had to stop and create Instagram and Tik Tok posts outside the famous Mrs Doubtfire house.

On Friday nights in Fort Mason there is a massive block of food trucks and bars set up. This was one of the better times I had in the city, but make sure you bring a jacket if you’re going in August – because cold beer in that weather is not a good match especially after spending the last few months in the dead heat of NYC.

I then left for LA – the City of Angels I had heard so much about. I was staying in Venice Beach, the coolest place I have ever stayed. On my first day, I went for an early morning swim on the beach and then walked the entire beach until I ended up in Santa Monica Pier – only to realise when I got home that not wearing sun cream can really ruin your days in Los Angeles.

Santa Monica Pier and the walk up to it was amazing. From Muscle Beach to all the stalls, the basketball courts, the skate park and all the rides on the pier itself was everything I had wanted to do and see. The city itself is not as desirable, but it was great to see the Walk of Fame, Capitol Records, the Hollywood sign and the Chinese Theatre. If you’re hoping for it to be like the movies, it might be a bit disappointing – but it is still great to see.

On my final few days before flying home, I decide to travel to Anaheim in California. I am, like many, a massive Disney fan and had to go and spend a few days in Disneyland. Being a frequent visitor of Disneyland Paris, I was expecting it to be similar, but it was bigger and better. Seeing all the characters and getting on almost every ride I could, it was one of the highlights of my trip. The bright lights, displays and night-time shows still give me chills. 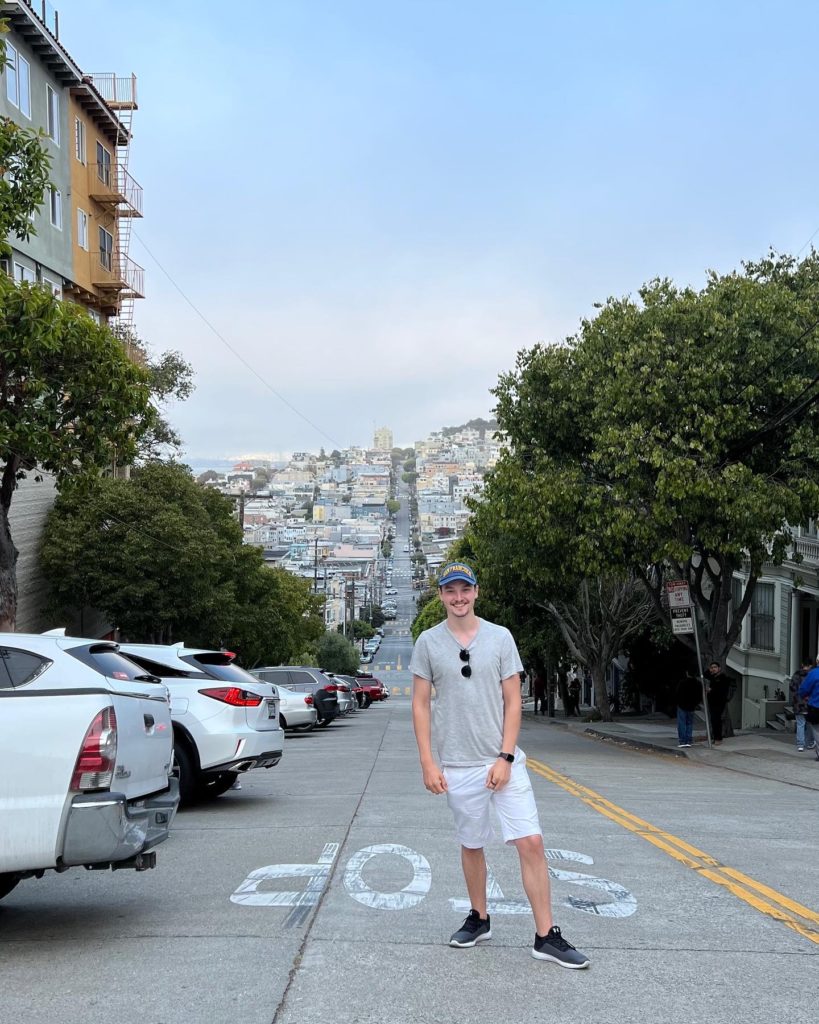 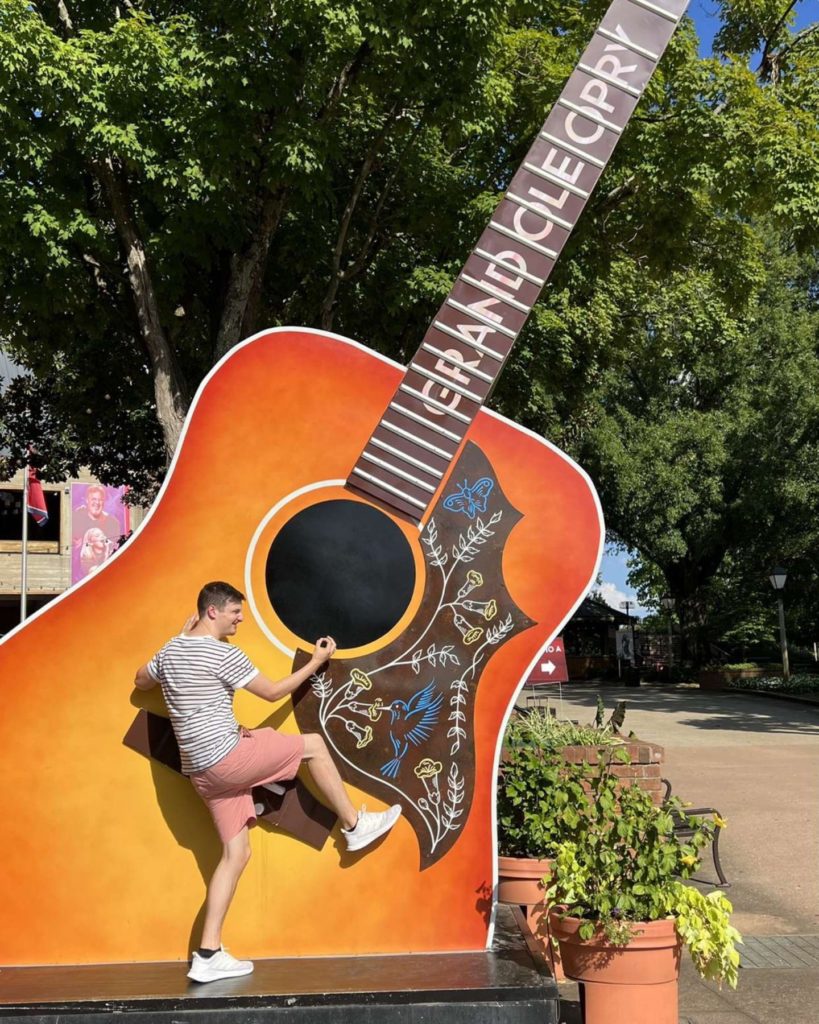 My time in NYC and the month travelling flew by, but it was one of the best experiences of my life. While you’re young, it is so important to travel and try new things. And while you’re in college, the J1 is the perfect opportunity to do that. I can’t recommend it enough.

Get your summer started with USIT’s J1 visa. Find out more.